The Father of American Animation: Winsor McCay and Gertie the Dinosaur

So who doesn’t love dinosaurs?

For a century now, American animators have used dinosaurs to entrance the eyes and minds of audiences. As a child, the dinosaurs in Walt Disney’s Fantasia left me with a love of Igor Stravinsky’s The Rites of Spring. The tyrannosaurus rex and stegosaurus from stop-motion animator Willis O’Brien’s King Kong still thrill me every bit as much as that big ape does. O’Brien’s disciple Ray Harryhausen brought more wonderful dinosaurs to life in One Million Years B.C. and The Valley of Gwangi, which are still very impressive. I’d rather be eaten by one of Harryhausen’s creatures than by the slick CGI work in Jurassic Park.

Heck, I’d rather be eaten by Dino from The Flintstones. My children probably feel the same way about Don Bluth’s kid dinosaurs from The Land Before Time franchise.

Well, not about getting eaten by them. They’re not that enthusiastic. 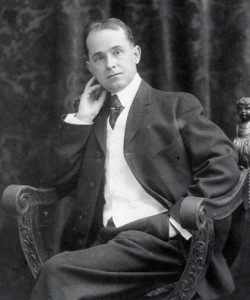 But the father of them all, and a man who deserves to be known as the father of American animation, is Winsor McCay, whose creation Gertie the Dinosaur was the very first dinosaur to be on the big screen.

McCay was one of those enormously important innovators who create whole new art forms. As important as Walt Disney and Chuck Jones are in the history of animation as the ultimate masters of the form, McCay was the man who brought together many of the technical innovations that animators still use today, as well as being the first to create characters with whom audiences fell in love.

Granted, McCay is not the first animator, American or otherwise (James Stuart Blackton and Émile Cohl tried the form sooner). But animation historian Michael Barrier, the author of the indispensible Hollywood Cartoons, calls McCay “the first American animator of consequence” because he “made films that people wanted to see.” McCay had already been instrumental in helping to originate the comic strip in newspapers. To this day, his Little Nemo in Slumberland has to be seen to be believed in all its baroque majesty.

McCay was also famous on the vaudeville circuit, where he supplemented his income as a cartoonist by doing what are still called “chalk talks.” With a large easel and a crayon, McCay would draw caricatures of audience members, or transform one picture into another while he kept up a comic patter. One of his favorite routines was based on Shakespeare’s monologue about “The Seven Ages of Man” from As You Like It. McCay would recite the famous lines “All the world’s a stage / And all the men and women merely players” while he drew the faces of a man and a woman – and then aged the pictures until he reached the final lines. McCay was a very popular entertainer, but every vaudeville act needed a new gimmick now and then to keep things fresh.

And that’s where Gertie the Dinosaur lumbers into the picture in 1914.

McCay had already made a cartoon version of his famous Little Nemo in 1911, releasing it to both movie theaters and then using it in his vaudeville act. The original idea came from his son playing with flipbooks, in which a child rifles the pages of a book rapidly with his finger, thus causing the individual drawings to appear to be in motion. McCay realized the same principle could be used on separate film frames. McCay proceeded to use four thousand pieces of rice paper for his original cartoon, inventing the idea of numbering each drawing to maintain the sequencing. He mounted the rice paper on cardboard to facilitate shooting, then used a rotary machine to flip the cards so he could check the animation (another innovation, which can be seen in the short). When the black and white release proved successful, McCay then hand-tinted the frames to further reproduce the look of the original Little Nemo comic. Little Nemo is still worth watching, from the quaint ridicule that meets with McCay’s announcement that he can make pictures move to the somewhat silly behind the scenes creation of the cartoon. The animation itself only lasts about four minutes, and is largely a demonstration of stretching and squashing two of the characters at the behest of Nemo. The ending is more charming, as Nemo and the Princess are carried away in the mouth of a friendly dragon, which has become a kind of throne.

McCay decided to try another short for his vaudeville act the next year, going for the gross-out with How a Mosquito Operates. The mosquito is rendered with comic exaggeration, but with realistic details. McCay provides the insect with a personality and a narrative, unlike Little Nemo, which really didn’t tell a story as McCay relied on the fame of the characters and the novelty. A man tries to sleep; a mosquito enters, and proceeds to drink its fill (until the gruesome end). McCay made six thousand drawings this time; the final scene was hand-tinted in red. McCay introduced the idea of repeated cycles of animation loops, an economically necessary step for someone animating by themselves, but one which has been used ever since to cut corners. Nothing like How a Mosquito Operates had been seen before. With its success, McCay was emboldened to go all out with a new idea: Gertie the Dinosaur.

McCay realized that he could not produce longer, more elaborate animations without assistance, so he brought in an assistant, John A. Fitzsimmons, to draw the backgrounds. McCay then produced one of the critical techniques in animation by doing the transitional points of animation (called key frames) first, to help lay out the overall action of the cartoon. He then went back and did what is called “inbetweening” or “tweening.” In the future, animation studios would use secondary artists to do these intermediary drawings, so as to allow their master animators to focus on the creative aspects of animation. McCay also invented the use of registration marks in the corners of the paper, so as to help maintain stability of the image when the actual photography took place (the paper and marks were later replaced as an industry practice with animation cels with registration pegs to do the same stabilization more effectively). With these new tools and Fitzsimmons, McCay was able to create Gertie the Dinosaur, his most innovative, interactive, and enduring cartoon.

McCay would enter the stage, cracking a whip, and calling forth Gertie. The cartoon would then roll, and McCay would put Gertie through her various “tricks” as if she were real and he was her trainer. McCay also inserted himself into the cartoon, thus combining live action and animation (imitated by the Fleischer brothers in their Out of the Inkwell series and by Walt Disney in his Alice in Wonderland silents). The version we still have is the one released later in movie theaters, with a frame story largely cloned from the one that introduced Little Nemo three years earlier, and McCay’s patter reproduced by title cards. Walt Disney and his animators produced a loving recreation of the vaudeville version in 1955 for his television show Disneyland, with the help of McCay’s son Robert. Today, a large version of Gertie acts as an ice cream stand in Disney World. In the cartoon, Gertie eats pretty much everything she can. She’d probably eats the ice cream too. On reflection, I’d rather eat the ice cream too, than get eaten by Gertie. I’d probably give the poor thing indigestion.