Update for the LED500 posted on June 18, 2014.  This update will resolve the blinking line issue seen when viewing still images.

1.  Create a folder named “LG_DTV” on the root directory on a USB flash drive.

2.  Download the file linked below into the “LG_DTV” folder.

4.  Power on the projector.

5.  When prompted, select “Start” on the dialog box. The projector will restart when completed. 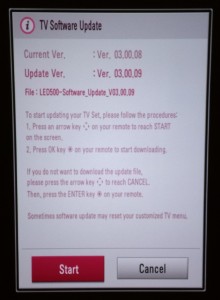 6.  When restarted a dialog box should show the projector is updated to the current version 03.00.09 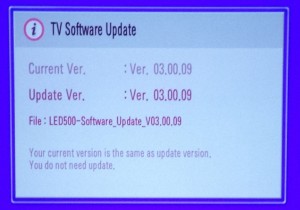 7.  Press “Exit” on the remote to dismiss the dialog box.  You may remove the USB flash drive and delete the “LG_DTV” folder and update file.