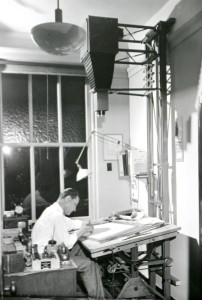 The fascination of seeing an image has enthralled mankind ever since that first man or women mused over their reflection in some primordial pool of water. In the fourth century BC, Aristotle wrote about projection phenomenon, having observed the crescent-shaped images of the sun during a partial eclipse that formed on the forest ground. This fascination continued throughout the ages, until some curious inventor soon turned this magic into devices such as the Camera Obscura and the Camera Lucida. These strange devices, which became known as projectors, have entertained and mesmerized scientists, entertainers, and the common man throughout time. But it was the artist who embraced the unique benefits of the projector which allowed them to maximize their talents. It was this very reason that led to the creation of Artograph in 1947.

Artograph was founded in Minneapolis in 1947 by three entrepreneurs, Ed Hirschoff, John Engel, and Les Kouba, who wanted to start a company that produced time-saving devices. After many ideas which didn’t quite get off the ground, one of the men, Les Kouba, a promising wildlife artist, suggested developing a projector to help him enlarge his wildlife photos onto a canvas. Thus, the first Artograph projector was born. This first projector was built from assorted automobile parts, garage door track, plywood, and bellows—all scavenged from a junk shop.

In the 1980’s, as technology and the age of the computer flourished, Artograph’s focus expanded from the commercial artist and designer to include the distinctive needs of the fine artist and the crafter. A number of new projectors were introduced and the term “Artograph it!” soon became synonymous with using an art projector to save time and increase productivity. 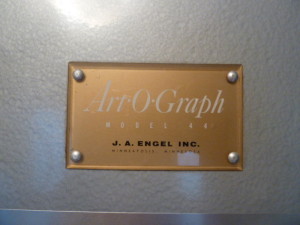 Artograph continued to focus on the needs of the artist and crafter by introducing a continuous line of new projectors including the AG100, Design-Master, Prism, and Tracer. In the late 1990’s, Artograph introduced a new concept of light boxes to the craft market; the Lightracer and Lightracer II became the required tools for the burgeoning scrapbook and custom card-making markets.

Since then several new products have been added to the popular light box line including the GLOBOX, ProSeries, Art Series, Elite series and an animation light box to fit the needs of all artists, crafters, designers and a new growing market segment, the animator.

An early Artograph is used to make a Popular Mechanics cover for the Robert Heinlein movie “Destination Moon.”

With the development of LED technology, Artograph’s commitment to ever-greener and more energy efficient products shines in the LightPad LX and LightPad PRO. Ideal for artists, animators, drafters, and crafters of every sort, these durable and versatile light boxes lead the way into the creative future.

The Flare – Inspire – Impression line of digital Art Projectors combine the benefits of a brilliant digital projector with all the features artists need, with an in-home HDTV movie projector.

Additional product lines have also been added over the years, including the Open Studio Cart line, featuring  strong, lasting art carts for the artist and crafter.

Over seventy years later, the vision of Artograph’s founders is still evident in every product we make. Artograph remains committed to the mission of making the creative process more rewarding and productive to our customers, and yours, while motivating them to discover and enjoy their inner creativity.