From the Renaissance greats to the premier fine artists of today…

The legacy of the projector as a tool for master artists reaches a new pinnacle with the LED 1000™ HD Digital Art Projector™ from Artograph.

From da Vinci to Vermeer to the Artograph DB300, now to the new LED 1000, the projector is long-recognized as a vital tool in the palette of discerning commercial and fine artists.

Artograph is pleased to announce this top-of-the-line high definition projector, custom configured for the needs of artists and crafters, is now available.

Twenty custom built-in GRIDS bring superior capability for layout, composition, and scaling, ready at the touch of a button on the remote. KEYSTONE adjustment gives flexible perspective control on any surface at any angle. GRAYSCALE and CONTRAST controls create unsurpassed tonal evaluation. COLOR TEMP/HUE adjustments give the artist vivid images in all lighting conditions.

Artograph is proud to bring this latest tool in our long line of successful Products for the Creative Mind® to the professional art market. The LED 1000™ HD Digital Art Projector™ is a stellar addition to the Artograph tradition of quality, reliability, and ever-greener products for the arts.

More info and specs at: http://www.artograph.com/led1000/

FOR QUILTING, SEWING, AND OTHER FABRIC ARTS:

For the 21st Century quilting and fabric artist, the projector is as essential a tool in the sewing box as a pincushion was in our grandmothers’ time.

In quilting and other fabric arts, layout and design spring from the creativity of the designer. Now the quilter can develop a design on paper or in a computer and project the design in full scale onto pattern paper. Built-in GRIDS, and other features, aid the artist in layout, scaling, and composition.

Using the COLOR, CONTRAST, and GRAYSCALE features, a quilt designer can project a photograph and develop it into a vibrant fabric design.

Artograph was founded in Minneapolis in 1947 by three entrepreneurs, Ed Hirschoff, John Engel, and Les Kouba, who wanted to start a company that produced time-saving devices. Les Kouba, a promising wildlife artist, suggested developing a projector to help him enlarge his wildlife photos onto a canvas. Thus, the first Artograph projector was born.

ABOUT HISTORY OF ART PROJECTORS:

In the fourth century BC, Aristotle wrote about projection phenomenon, having observed the crescent-shaped images of the sun during a partial eclipse that formed on the forest ground. This fascination continued throughout the ages, until some curious inventor soon turned this magic into devices such as the Camera Obscura and the Camera Lucida. It was the artist who embraced the unique benefits of the projector which allowed them to maximize their talents.

Leonardo da Vinci left a number of his papers intact which still exist. The largest collection of these is called the Codex Atlanticus, and it covers a wide variety of subjects – including the principles of the Camera Obscura. One of the most talented artists of the 1600s, Jan Vermeer, is credited with using a Camera Obscura to help him produce his masterpieces. David Hockney, a world-famous artist in his own right, published a book in 2001, Secret Knowledge: Rediscovering the Lost Techniques of the Old Masters, in which he argued that Vermeer (and other artists, including Diego Velázquez) used a combination of optical aids to create their photorealistic effects. Hockney worked with physicist and optics expert Charles Falco to show the different devices and methods artists used before the invention of photography in the nineteenth century. 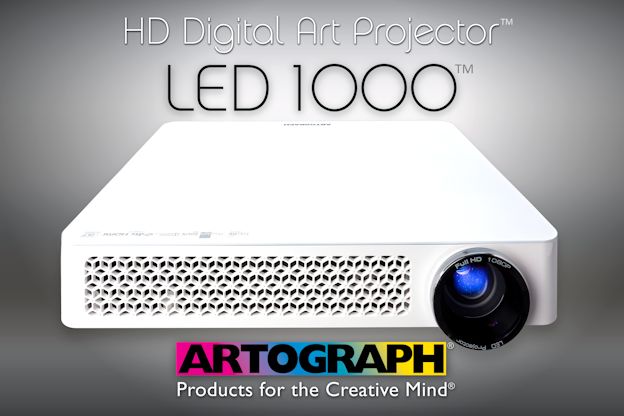